The ACSI office in Southern California has served as a place of dedicated service and priceless memories for over three decades. With its closing this month, ACSI is reflecting on the relationships that have truly embodied the mission of Christian education, while welcoming a new, exciting chapter.

The office opened in 1987 in La Habra, California under the leadership of Dr. Paul Kienel and originally served as the ACSI Headquarters. In the 1990s, ACSI Headquarters moved to Colorado Springs and the ACSI Southern California regional team stayed in the La Habra office until its relocation to Brea in 2008.

Since the onset of COVID-19, ACSI employees have successfully served schools remotely. With the Brea office lease expiring in May 2021, ACSI leadership has decided to permanently transition this office to a remote environment.

“The decision to operate remotely was an easy one,” he said. “When considering the amount of time spent out of the office on school campuses, deciding to take the team remote permanently is the best option for providing services to members and stewardship of resources.”

Over the years, staff at the Brea office have hosted dozens of school leaders for district meetings, accreditation trainings, student activities meetings and more.

Former ACSI Southern California Regional Director, Dr. Jerry Haddock, reflected on his time at ACSI fondly. “California has a large number of member schools,” he said. “I loved the comradery of Christian school administrators and teachers, and the majority of them had convenient access to ACSI and vice versa.”

However, the office was never just a building— It was a group of people passionately committed to Christ-centered education.

Rohn Ritzema, former ACSI California/Hawaii Regional Director, agreed with Haddock that the one characteristic standing out to him in his 25 (+) years at ACSI is comradery.

“The neat thing about regional offices is that we all had coffee and devotions together every morning, Monday through Friday, and we’d pray for each other, our schools and ACSI,” he said. “We’d share what was on our schedule for the day and it was a really great way to begin each morning.”

While each employee had their distinct job description, all functioned as a team. During conventions, conferences and major student activities events, the entire staff worked together.

“The days leading up to Anaheim Convention were always so fun because we’d do a drive by for attending schools, administrators or staff, coming to pick up their conference materials” she said. “There was such a buzz in the air because we knew we were going to be together soon at the event.”

The culture of family and relationship remained constant throughout the years in the Western Division.

Perhaps more than anyone, Ritzema identified most with the notion that the office felt like home. During his time as regional director, Ritzema lived 500 miles from Brea and thus would commute, staying for a week at a time.

“It’s funny— I bought an inflatable bed, and the extra office became my bedroom,” he laughed. “I’d spend a week down there in the office, then commute home for a week. I did that for 2 ½ years.”

The ACSI California staff have created memories and truly experienced life together, from birthday celebrations to team building activities.

“The ‘office’ really isn’t about the four walls around us,” Ilertsen shared. “It’s about the people—our team and our schools.”

Relationship continues to be a priority for the Western Division.

“We meet every Wednesday at 8:30 a.m. to pray and connect,” Swetland said. “When we were face-to-face, we started every day in prayer and sending prayer cards to our school leaders. We have changed it up due to working remotely, but still place a high value and priority on being a team.”

The ACSI Western Division staff can be reached by calling (714) 256-1287, or by emailing ACSI_West@acsi.org. To learn more about the Western Division, visit the ACSI website. 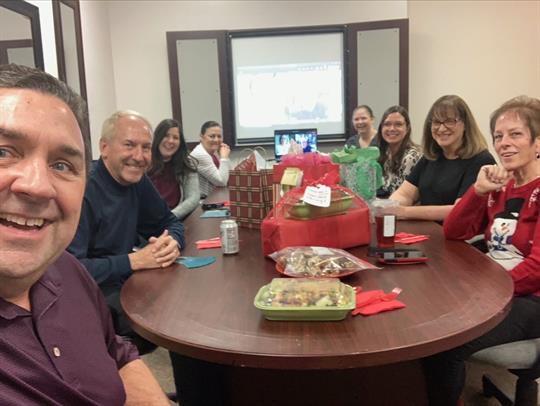